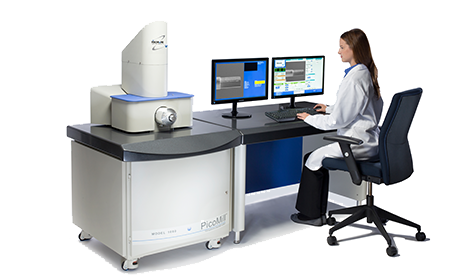 Focused ion beam (FIB) milling is a widely used technique for today’s cutting-edge materials that provides
a means to prepare transmission electron microscopy (TEM) specimens.
The challenge in working with these advanced materials is to create specimens that are electron transparent and are free from artifacts.
The FIB is highly effective in preparing TEM specimens, but the use of a high-energy, liquid metal ion source can often result in specimen amorphization, gallium implantation, or both.
The PicoMill system is the ideal complement to FIB technology; it adds the increased capability of producing optimal specimen quality while enhancing the overall specimen preparation throughput by moving final thinning offline.

A history of specimen preparation innovation

Since 2006, Fischione Instruments’ revolutionary NanoMill® TEM specimen preparation system has set the standard for high-quality TEM specimen preparation.
The NanoMill system’s unique combination of features – ultra-low energy ion source, low-angle milling capabilities, and submicron ion beam diameter – have been critical for uncovering specific features of interest within TEM specimens.
The NanoMill system has produced specimens with optimal quality for a number of research and industrial applications, including oxides, fuel cells, photovoltaics, battery materials, and many others.
For microelectronic and semiconductor applications, the NanoMill system’s capabilities have played a critical role in producing pristine TEM specimens.
Since the introduction of the NanoMill system, the microelectronics industry has continued to develop products that are increasingly smaller in size and increasingly complex in geometry, such as three-dimensional FinFET gate architectures and vertical NAND gates.
These intricate devices are comprised of varying densities of dissimilar materials with structures that can contain compounds, such as repeating layers of oxides, silicides, nitrides, various metals, and a mix of high-k and low-k dielectric materials.
These structures contain materials with very different atomic numbers, which can result in differing sputter rates. Preparing these unique specimens for high-resolution imaging by TEM has been consistently achieved with the NanoMill system’s advanced technology.
Decreased device sizes coupled with increased materials complexity demand the next generation of TEM specimen preparation. Drawing on our history of innovation, Fischione Instruments developed the PicoMill TEM specimen preparation system, taking the NanoMill system technology to the highest possible level.

Designed specifically to integrate into a FIB workflow

Focused ion beam (FIB) technology is frequently the choice for creating TEM specimens. The FIB is used to create a site-specific, extremely thin lamella that is extracted and mounted to a supporting grid for TEM imaging and analysis. The FIB is highly effective in preparing TEM specimens; however, the FIB’s liquid metal (gallium) ion source can result in amorphization, gallium implantation, or both. These damaged layers can be as thick as 10 to 30 nm.
The FIB process is often started at high kilovolt energy levels and the voltage is decreased as the lamella thins. For very low-energy FIB applications, the operator may need to refocus the instrument and realign the beam. This can slow down the overall processing time per specimen. In addition, even low-voltage milling with the FIB may result in gallium implantation.
The PicoMill system is ideally suited to removing these damaged layers. It offers the key features of the NanoMill system – ultra-low energy, inert gas ion source, low-angle milling capabilities, and submicron ion beam diameter – with the added capability of a scanning electron column and multiple detectors. The scanning electron column provides the ability to image a lamella at a scale that is sufficient to view the features of interest.

Let the FIB do what the FIB does best; let the PicoMill system do the rest

From FIB to PicoMill system to TEM

The PicoMill system’s ion source features a filament-based ionization chamber and electrostatic lenses. The ion source was specifically developed to produce ultra-low ion energies with a submicron ion beam diameter. It uses inert gas (argon) and has an operating voltage range of 50 eV to 2 kV.
The ion source’s feedback control algorithm automatically produces stable and repeatable ion beam conditions over a wide variety of milling parameters. Redeposition of sputtered material onto the area of interest is avoided because the ion beam can be focused to a specific area. You can scan a region of the specimen’s surface or target a specific area for selective milling. The ions only contact the site of interest on the specimen where they are needed to do the work. The ion beam is kept away from the grid, which prevents redeposition.

The ion beam impingement angle is programmable from -15° to +90°. The ion source is fixed in position and the goniometer tilts the specimen holder to achieve the programmed milling angle through the PicoMill system user interface. The specimen is positioned along the X, Y, and Z axes to precisely orient the FIB lamella with respect to the ion and electron beams.
Milling specimens at a low angle of incidence (less than 10°) minimizes damage and specimen heating. Because low-angle milling, combined with ion beam rasterizing, facilitates uniform thinning of dissimilar materials, it is highly beneficial when preparing layered structures or composite materials.

To complement the scanning electron column, the PicoMill system has multiple detectors:

The detector combination allows you to perform in situ imaging of the specimen before, during, and after ion milling. The grid containing a
FIB lamella or a specific site on a conventionally prepared specimen can be imaged.
You can view specimens in situ on a dedicated monitor that displays both electron- and ion- induced secondary electron images. Image capture is as simple as a click of a mouse.

The PicoMill system is controlled via an intuitive user interface. You enter all milling parameters through the interface, such as milling angle, specimen position, and processing time. SEM control and detector selection are also user controlled.

A specimen prepared with optimal electron transparency is the ultimate goal for the best quality TEM imaging and analysis. This is particularly key when employing today’s aberration corrected TEM technology.
As the specimen thins, electron transmission increases and the leading edge recedes, which allows the STEM detector to provide end point information. The PicoMill system is also capable of time-based termination or it can be stopped manually.